If you think of people with a lot of compassion and respect, the Satanists wouldn’t be exactly the ones that come to mind. But recently, The Satanic Temple, a non-theistic religious group, has gone viral for only good reasons.

The members of the temple announced online that it demanded the Food and Drug Administration (FDA) grant the group access to drugs that induce abortion “without being subjected to the agency’s regulations.” The demand that requests access to abortion pills known as misprostol and mifepristone was made under the Religious Freedom Restoration Act.

Moreover, the Temple’s letter to the FDA came the same day that the Supreme Court validated a Texas law that prohibits abortions after six weeks. If allowed to remain, the law would be the strictest against abortion rights in the US since the high court’s landmark Roe v. Wade decision in 1973.

“We still have Religious Liberty, and we believe in bodily autonomy,” The Satanic Temple announced on Twitter, amassing a lot of supportive reactions.

Lawyers for The Satanic Temple (TST) sent a letter to the Food and Drug Administration (FDA) to request that TST be able to access abortifacients without being subjected to the agency’s regulations.
We still have Religious Liberty, and we believe in bodily autonomy.#roevswade pic.twitter.com/cJsmZ2WMul

The U.S. Supreme Court refused to obstruct a Texas law that amounts to a ban on abortions after six weeks of pregnancy. The vote was 5-4, with three Trump-appointed justices joining two other conservative justices.

According to the Texas law that was signed by Republican Gov. Greg Abbott in May, abortions once medical professionals can detect cardiac activity are prohibited. This happens as early as around six weeks and many women don’t even know they’re pregnant at that point.

Even though the Supreme Court’s decision left an option for abortion providers to challenge the Texas law in other ways, the future of the Texas law is yet unknown, leaving many women frustrated and miserable to say the least. 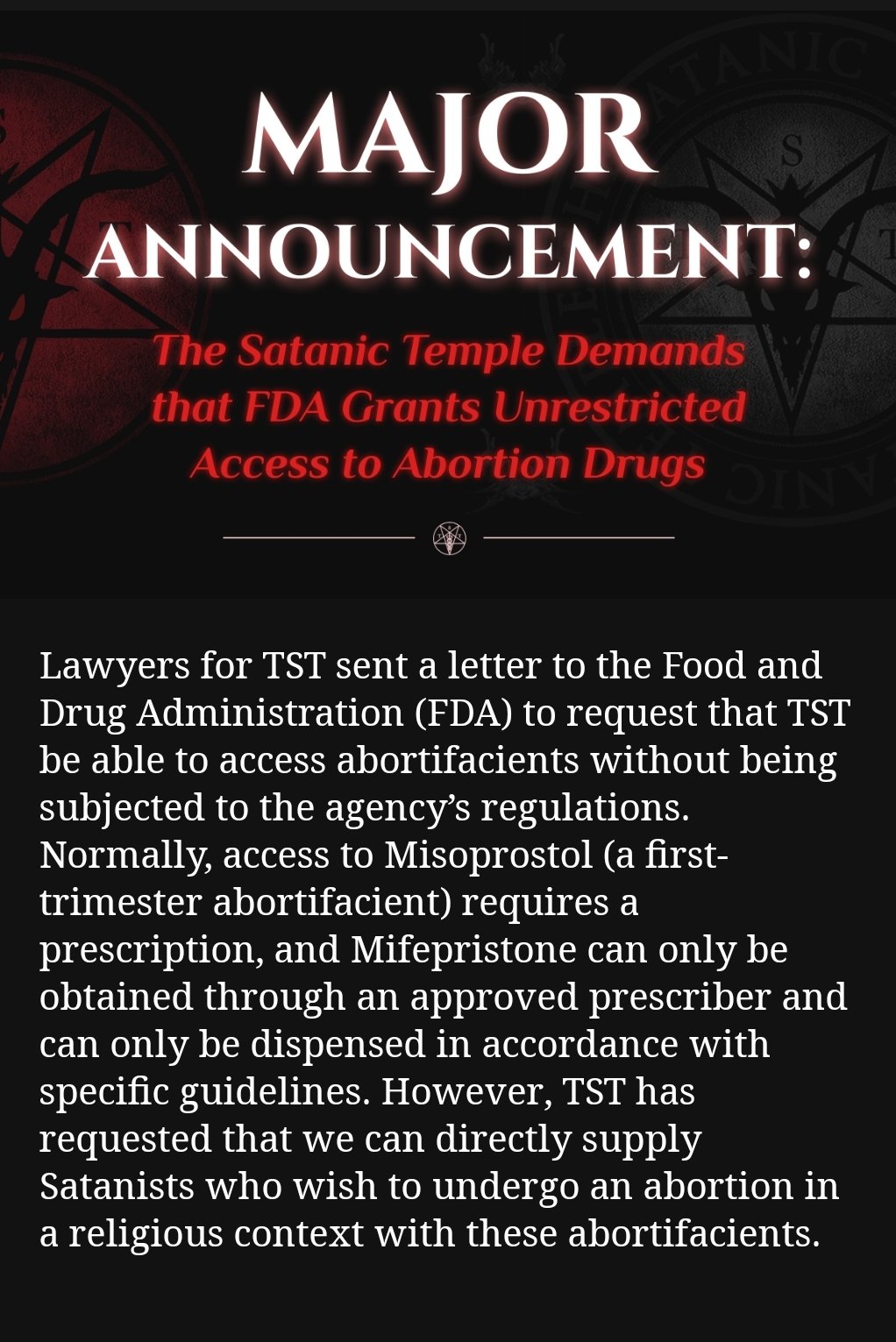 Moreover, more states are moving towards curbing abortions. While Texas has passed the strictest abortion measure in the U.S., many conservative states are seeking to ban most abortions earlier in gestation. Today, most states restrict woman’s access to abortion in late pregnancy.

President Biden on Thursday slammed the Supreme Court ruling, saying it “unleashes unconstitutional chaos.” He promised the White House will be looking for ways the federal government could ensure Texans have access to safe and legal abortions and to protect people from enforcement of the Texas law, in an official statement.