While the people of the western world occupy themselves wearing masks, pointing fingers and using so much hand sanitizer it literally kills them, the big world of Geo-Politics still ticks along, following the same tired old patterns with only slight variations in method. A modern twist, if you will.

And now for the long version…

The Council on Foreign Relations blog posts an article titled “COVID-19 is Coinciding with Dangerous Trends in Burundi’s Democracy”.

At that time Burundi was listed as having 7 ‘active cases’ of COVID-19.

President Pierre Nukurunziza’s reluctance to impose policies aimed at stopping the virus from spreading is converging with his enthusiasm for democratic authoritarianism, putting not only Burundi, but Burundi’s neighbors at risk.
[…]
Burundi’s trajectory has been apparent for some time. But the pandemic now raises the stakes for neighboring states whose attempts to control the virus are threatened by Burundi’s insistence on moving ahead with electoral theater regardless of the public health risks involved.
[…]
Just as the EAC’s attempts to advance dialogue in Burundi did nothing to stave off the closing of political space, today the organization seems helpless at best as Burundi and neighboring Tanzania refuse to take COVID-19 seriously.

Reuters reports that Burundi’s government expels the WHO:

Burundi is expelling the national head of the World Health Organisation (WHO) and three members of his team as it prepares for a presidential election that is being held next week despite concern about health risks during the coronavirus pandemic.

The government confirmed on Thursday that a May 12 letter from the foreign ministry was sent to WHO country head Walter Kazadi Mulombo and three others of the U.N. body’s health experts, ordering them out by Friday. Bernard Ntahiraja, the foreign affairs assistant minister, said the officials had been declared “persona non grata” but did not give reasons.
[…]
Burundi has so far reported relatively few cases of the COVID-19 disease: 27 infections and one death. But testing remains very low: the nation of 11 million people has carried out only 527 tests, according to the Africa Centres for Disease Control and Prevention (CDC).
[…]
Large crowds have been gathering during the election campaign in Burundi, which has no lockdown measures in place at all, unlike many other African nations.
[…]
Some Burundians say privately they believe COVID-19 infections are higher than officially stated but they say they fear to say so publicly because they could be targeted and punished. Léonce Ngendakumana, a presidential candidate for the opposition FRODEBU party, called the expulsion regrettable. “The country alone won’t be able to contain the pandemic,” he told Reuters.

The Guardian reports the death of Burundian President Pierre Nkurunziza of “suspected Covid19” [our emphasis]:

The outgoing president of Burundi has died of a sudden illness, suspected by many to be Covid-19.

The cause of Pierre Nkurunziza’s death was described as a heart attack in a government statement. The 55-year-old was due to stand down in August following elections last month.

It was unclear exactly when he died. A government statement said the president, a keen sports enthusiast, had attended a game of volleyball on Saturday but fell ill that night and was taken to hospital.

The former footballer’s health improved on Sunday but “surprisingly, on morning of Monday June 8, 2020, his health suddenly deteriorated and he had a heart attack”. The statement described Nkurunziza’s death as “unexpected” and asked people to remain calm.

The Financial Times runs an article titled “Coronavirus stalks Burundi’s political elite after president’s death”. It’s behind a paywall, but here’s a screenshot: Burundi’s new President Evariste Ndayishimiye has declared the coronavirus the country’s “biggest enemy”, in a major about-turn for a nation which has largely ignored the dangers of the virus.

Former president Pierre Nkurunziza, who died suddenly last month, and even Ndayishimiye himself, had until now downplayed the gravity of the pandemic, saying God had spared Burundi from its ravages. Burundi held a full-blown campaign ahead of a May election, and unlike its neighbours which have imposed lockdowns and curfews, has taken few measures to combat the spread of the virus.

Officially the country has reported only 170 cases and one death in two months. Ndayishimiye was speaking late Tuesday after the swearing in of his new government in parliament. “From tomorrow (Wednesday), I declare the COVID-19 pandemic the biggest enemy of Burundians, because it is clear it is becoming their biggest concern,” he said.

“We firmly commit ourselves to fight this pandemic.” He called for “the strict respect for preventative measures which the health ministry will from now on display across the country”.

He reminded citizens that coronavirus tests were free, as was treatment, warning those who did not get tested when they had symptoms.

“If in future someone does not go and get tested in such a case, it means he wants to contaminate others voluntarily… and he will be considered a sorcerer and treated as severely as one would be,” he said.

As of today, Worldometers.info lists 1 single death & 269 “Total Cases” of Covid19 for Burundi: 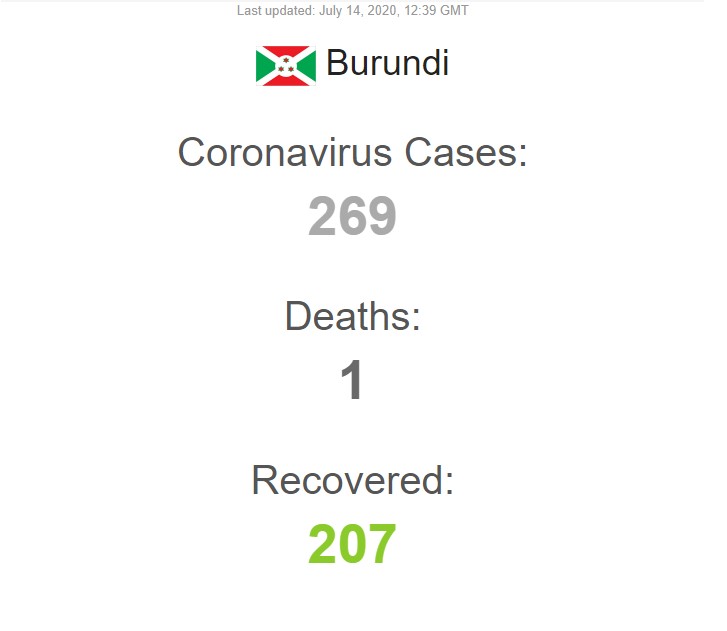 It seems Covid19 is a disease of rare complexity. Not only is it able to understand the importance of some social protests and avoid them entirely, it’s also able to sense when the world leader is inconvenient and take him out.

Many thanks to commenter Stinky, who collated, researched and sent in these links, as well as Edwige and Mucho.