Browse: Home / The Axis Of Resistance Announces The Project That Will Avenge Qassem Soleimani

The media continue to tell fairytales about Qassem Soleimani and about Trumps decision to assassinate him and PMU leader Abu Mahdi al-Muhandis. Meanwhile the Resistance Axis announced how it will avenge their deaths.

In their descriptions of Qassem Soleimani U.S. media fail to mention that Soleimani and the U.S. fought on the same side. In 2001 Iran supported the U.S. invasion of Afghanistan. It used its good relations with the Hazara Militia and the anti-Taliban Northern Alliance, which both the CIA and Iran had supplied for years, to support the U.S. operation. The Wikipedia entry for the 2001 uprising in Herat lists U.S. General Tommy Franks and General Qassem Soleimani as allied commanders. 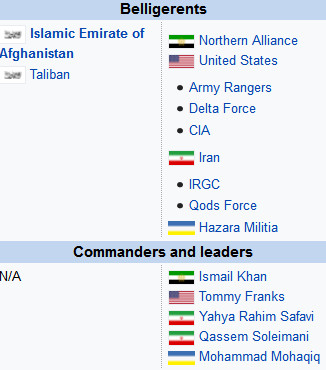 The collaboration ended in 2002 after George W. Bush named Iran as a member of his “Axis of Evil“.

In 2015 the U.S. and Iran again collaborated. This time to defeat ISIS in Iraq. During the battle to liberate Tikrit the U.S. air force flew in support of General Soleimani’s ground forces. Newsweek reported at that time:

Cont. reading: The Axis Of Resistance Announces The Project That Will Avenge Qassem Soleimani