Americans have gone from viewing the sports industry positively, on balance, to negatively in the wake of sports leagues embracing the divisive Black Lives Matter movement, a new survey found.

According to a Gallup survey conducted Jul 30-Aug 12, 2020, only 30% of Americans view the industry positively versus 40% who view it negatively, giving the industry an overall rating of -10. 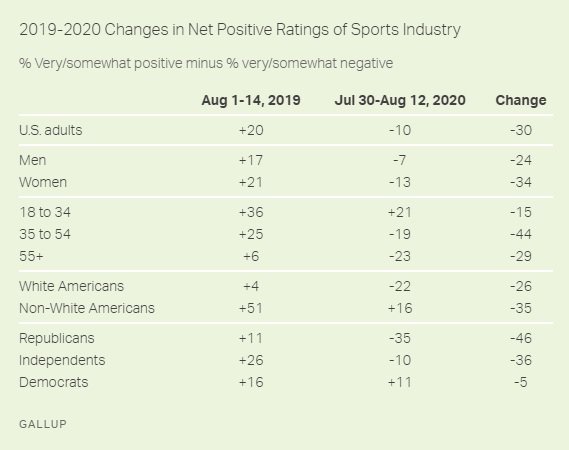 “Democrats’ view of the sports industry has not changed significantly in the past year, while Republicans’ has slipped from a +11 net-positive score in 2019 to a net -35 today, and independents’ from +26 to -10,” Gallup reported.

“‘The league has become too political’ was the clear choice for the decline, with 38% of respondents,” The Harris Poll reported. “‘Boring without fans’ captured 28% of the vote while the NBA’s association with China caused 19% of sports fans to turn the dial.”

Game 7 reported last week that the NBA’s ratings are in “free fall.”

“Despite the NBA Playoffs being in full swing and all the games having actual, genuine meaning, TV ratings for the first round were down 27 percent year over year,” Game 7 reported Tuesday.