Browse: Home / Why Hasn’t the NEW YORK TIMES Reported the Murder of Paul and Lydia Marino?

Why Hasn’t the NEW YORK TIMES Reported the Murder of Paul and Lydia Marino? Pretty much every morning, weather permitting, Paul and Lidia Marino, an elderly Italian-American couple from Elkton, Maryland, would drive the five miles to Delaware Veterans Memorial Cemetery, just across the border in, of course, Delaware. They would visit the grave of their son Anthony, who died three years ago at age 54.

Anthony was not himself a veteran. His Dad Paul was, though, and the cemetery rules allow disabled adult children of veterans to take a plot. Anthony had been born with cerebral palsy and suffered wretched health all his life. Paul and Lidia, both in their mid-eighties, married more than sixty years, had cared for Anthony until he died in 2017. They were helped by their older twin sons, Paul Junior and Ray.

Paul Senior worked in the printing industry for decades before retiring in 1994. Lidia was what we used to call a home-maker: cooking, shopping, minding the kids, keeping the house clean. She and Paul were both hobbyists: Lidia, like my own Mum, loved needlework, Paul painted and played guitar.

It’s a touching little bit of Americana: a close, busy, loving family, like a dozen you and I know, minding their business and facing life’s misfortunes with courage, humanity, and grit.

So there was this couple, he 86 and she 85, crossing the cemetery on their way to Anthony’s grave on the morning of May 8th as they had done hundreds of times before.

Twenty-nine-year-old Sheldon Francis, a black man dressed entirely in black, with a black face mask, came up behind them and shot them both with a handgun.[ For couple slain in veterans cemetery, visiting son’s grave was a daily ritual, Carl Hamilton, Newark(Maryland) Post, May 14, 2020] Lidia was shot first, and died at the scene. Paul was shot in the head, presumably after just seeing his wife shot; he died later in hospital.

The killer, Sheldon Francis, ran off into some nearby woods. He had a good-quality rifle with him and plenty of ammo, which suggests some planning beforehand. There was a standoff with police and a firefight. When Francis had been silent for a while, cops went into the woods and found him dead of a gunshot wound. Whether the wound was self-inflicted or the result of police shooting, we don’t know.

A horrible end to two lives well lived, and a third that would have been better not lived at all. Plainly a homicide, though, so we’re naturally curious to know the motive.

Let’s see: Italian Americans— is there a mob connection? Given what we know about the couple’s life, and about the killer, it seems highly improbable. Was Sheldon Francis a disgruntled employee or contractor? Again, that’s a bit of a stretch, given what we know. 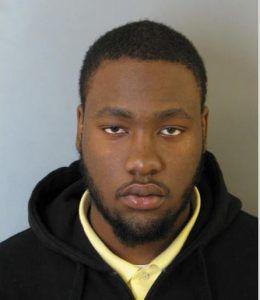 We don’t know much, though. About Sheldon Francis, we know almost nothing. I have been doggedly googling all week and still can’t find out anything about him. He must have some kind of rap sheet; the news pictures of him (right) are obvious law-enforcement mugshots. What does the rap sheet say? Was he married or single? How did he make a living?

Google … Google … Google … nothing. I just tried again, putting a filter on the Google search for “past week.” There’s a flurry of “Gunman Identified” items from four or five days ago, no new details. I changed the filter to “past 24 hours”: twelve hits on Sheldon Francis, but still no new information. We’re no wiser about possible motives.(The New York Times has nothing on either Francis or the Marinos, but a search for “Veterans’ Cemetery” brought up two AP stories [May 8, May 9] about the shooting, in which both victims and shooter were nameless and raceless. )

Hm. Let’s try a different shooter: Travis McMichael, the white guy who shot a black guy in Brunswick, Georgia, news of which came out just the day before the Marinos were killed. Filter to “past week”: hoo boy, “about 210,000 results” says Google. Let’s change the filter to “past 24 hours.” “About 32,000,” says Google.

As of 7 PM, May 16, eight days later, there has still been no mention of the murders of Paul and Lidia Marino in the national Main Stream Media, led of course by the New York Times.

What are they waiting for?

John Derbyshire [email him] writes an incredible amount on all sorts of subjects for all kinds of outlets. (This no longer includes National Review, whose editors had some kind of tantrum and fired him.) He is the author of We Are Doomed: Reclaiming Conservative Pessimism and several other books. He has had two books published by VDARE.com com: FROM THE DISSIDENT RIGHT (also available in Kindle) and FROM THE DISSIDENT RIGHT II: ESSAYS 2013.

Posted in Controlling the News And/Or the Free Exchange of Ideas and Information, Race, The Media, The Rotten Royals | 4 Responses

4 responses to “Why Hasn’t the NEW YORK TIMES Reported the Murder of Paul and Lydia Marino?”