Browse: Home / The Devil and the Donald

The Devil and the Donald

By Brother Nathanael Kapner on February 17, 2020 It is a legend in our town, perhaps not at all fictitious, since the tale has some marks of authenticity.

The story goes that a deal was made between a young man in our neighborhood and a shadowy figure that would appear at night to unsavory types, who after much drinking at one of our local taverns, would walk back to their dens while all else were asleep.

We discounted these encounters as mere apparitions, phantoms that drunken men accept as real episodes, to be given full merit to those they relate it.

Now on the outskirts of the city across the river, even beyond our famous airport, lies an old town house whose occupant was a builder of brownstones and small apartment complexes.

It was there that the main character of our story was born and raised, who from early childhood displayed a penchant for bombast, and demonstrated indications of someone destined for fame and fortune.

For he was a handsome creature, built lean and lithesome, and although not of high intellect, bore within him a talent for shrewdness, of which those who are easily deluded admire far above the virtue of deep thinking.

One night, as the legend goes, when the child entered into adulthood, he encountered this same shadowy figure, not after a long drinking bout, but after a shindig, that is, a night spent in passionate embrace with another woman, which it is said was his customary wont. MUCH HAS BEEN RUMORED regarding the outward aspect of this shadowy figure ranging from the suspicious to the dubious.

Our best accounts describe this figure as being short and squat, something akin to a pygmy, balding and with a small hooked nose, with dollar bills stuffed in his waistcoat, some even falling to the sidewalk.

“Donald,” the shadowy man said, “I see you’re a man of destiny and can make a name for yourself not only as a businessman but as a world leader.”

“It can all be arranged,” promised the squat man. “One of my disciples, a homosexual and a Jew who is well connected in the city, can get you started on your destined path.”

It wasn’t long after that the young man was joined to this personage, and in time was introduced to a family that enjoyed tremendous wealth and influence in the adjoining state due to its real estate enterprises.

The young man by this time, fain to eat of the crumbs of his newly found patrons, married a Jewish woman, perhaps as some allege, to advance his career in a Jewish environment, and as luck would have it, the female child of the marriage fell in love with the son of the influential family.

Soon skyscrapers with our young man’s name affixed to the real estate titles went up in that area, and even more spectacular ones in our own famous city not long after. 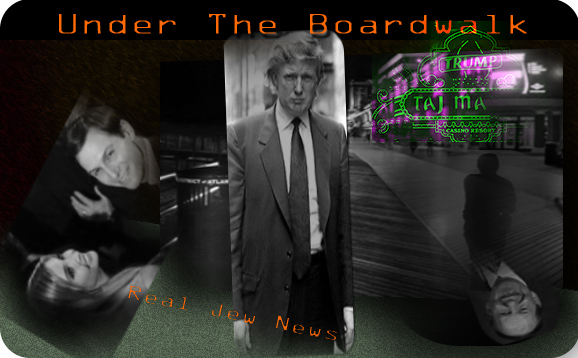 OUR HIGH-RISING BUILDER acquired a taste for beautiful women, and as the saying goes, “nature forges a man, now a gold man, now a fig man, now a bean man.”

Perceiving a man without principles but one of fierce ambition, the shadowy figure appeared once again to our main character.

The rendezvous took place on the boardwalk of Atlantic City late one evening after a long night at one of his casinos when our man of destiny was now in his fifties.

“Donald,” the hooked-nosed man enticed, “how would you like to be president of the United States?”

“Who wouldn’t?” he responded.

“Here’s the deal, and it will be the deal of the century. You come out of your elevator door at the time appointed, walk outside to a platform, and announce you’re going to build a wall on the Mexican border.”

“Then you appear at the Jewish Public Affairs Committee, of which I oversee, and tell the audience and the millions watching on their TVs that you will make Jerusalem their capital city and will move the US Embassy there.”

“Will do, will do. Then what?” he eagerly inquired.

“Say you have no problems with homosexuality and your presidency is assured. I’ll make sure all is accomplished.”

“It all sounds too easy,” he hesitated, “is there a hitch?”

“None at all,” the squat man answered, “simply do as I say.” 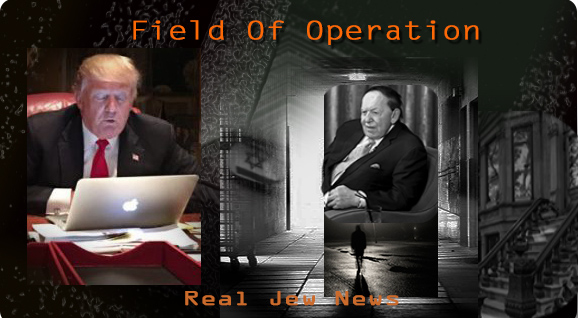 AS THE LEGEND GOES the shadowy figure appeared to our subject some years later as he sat at his desk in the capital city of the United States of America.

He was typing out what is popularly known as a ‘tweet,’ an oddity of our modern day, of which our forebears would have adjudged as placards for nitwits.

“Bravo Donald!” cheered the squat man, “for in that you’ve done this to the least of these my children you have done it unto me! Enter thou into the joys of Jewish history!”

“Jewish history?” the president demurred, “why not American history?”

“It’s all the same,” the shadowy figure replied, “for to you it is given to have the name of a ‘righteous gentile.’ And you will be the envy of every American that craves power and position that’s conferred by my chosen ones.”

“Will it get me into heaven?” the president asked.

“That’s not our business,” the squat man answered, “only to gratify the lusts of the world, the flesh, and of course myself, is our distinct field of operation.”

It was some years later, we heard, that an older man with blondish colored hair, with orange colored skin, was invited to be a special guest at a breakfast held at the Waldorf Astoria in order to honor ‘righteous gentiles.’

The blondish man received a gold watch, a Hanukkah menorah, and a key to the city of Manhattan, Jewry’s eternal capital.

Sitting behind a table in the furthest corner of the room was that same shadowy figure who often appeared to our now retired president.

Nodding approvingly, he leaned over to scribble something in a notebook, “My brood, my special brood, my peculiar people, they know how to turn a goy into a righteous gentile!”

That was all he wrote. The rest is American history.

How To Fix The Economy Here!

The Enemies Of Free Speech Here!

The Four Curses On Judaism Here!

5 responses to “The Devil and the Donald”