There is a level-4 biosafety laboratory in Wuhan, China, where microbiologists study and develop genetically engineered biological weapons. And in 2017, the science journal Nature warned the world about “pathogens escaping” and infecting the world. It now appears that scenario has unfolded exactly as feared.

“Some scientists outside China worry about pathogens escaping, and the addition of a biological dimension to geopolitical tensions between China and other nations,” warned NATURE in a February, 2017 article. “But Chinese microbiologists are celebrating their entrance to the elite cadre empowered to wrestle with the world’s greatest biological threats.”

The communist Chinese government, known for bullying the world while lying about its own genetic engineering weapons experiments on humans, claimed its BSL-4 laboratories would “benefit the world.”

“The lab was certified as meeting the standards and criteria of BSL-4 by the China National Accreditation Service for Conformity Assessment (CNAS) in January,” reports Nature. Which means, of course, that the lab has no safety standards whatsoever and the entire “accreditation” is a fraud. We know this because many accreditations in China are fraudulent, even across the food and supplements industry and “organics,” where organic foods from China are routinely found to be contaminated with pesticides and heavy metals, as confirmed in our own mass spec laboratory in Texas.

Nature explains: “BSL-4 is the highest level of biocontainment: its criteria include filtering air and treating water and waste before they leave the laboratory, and stipulating that researchers change clothes and shower before and after using lab facilities.”

You can be sure these procedures are not being followed, as the very culture of communist China is one of cutting corners, deceiving regulators and cheating on every way possible. There is a zero probability that China’s BSL-4 biohazard facilities are fully compliant with safety regulations.

The Seafood Market is a cover story

“The Wuhan National Biosafety Laboratory is located about 20 miles away from the Huanan Seafood Market,” reports the UK Daily Mail, which also publishes this map showing the geographic proximity of the two: 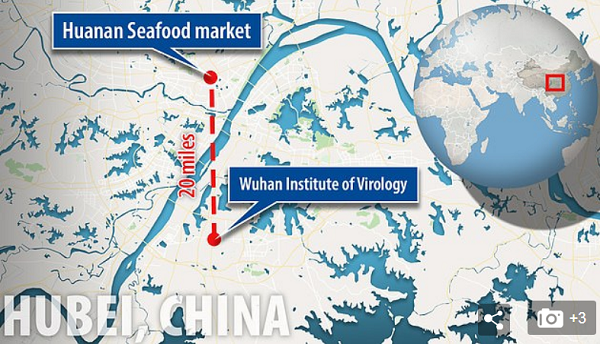 The UK Daily Mail also writes that a SARS virus “escaped in a leak from another [Chinese] lab in 2004… Chinese officials worked to improve safety, but also to expand the country’s capacity to continue to study the very virus its lab had let out.”

Did you catch that? The lab allowed SARS to escape so they could study its pandemic effects on the population at large.

In these Chinese labs, scientists there are intentionally infecting monkeys with the coronavirus to see what happens. As the UK Daily Mail writes, this is a very dangerous endeavor, since monkeys often attack researchers (which is understandable, considering they are being murdered by the unethical scientists there):

Studying the behaviour of a virus like 209-nCoV and developing treatments or vaccines for it requires infecting these research monkeys, an important step before human testing.

Monkeys are unpredictable though, warned Ebright.

‘They can run, they can scratch they can bite,’ he said, and the viruses they carry would go where their feet, nails and teeth do.

These Chinese labs have a history of allowing deadly pathogens to escape. In fact, as Nature explains, the very culture of secrecy and obedience that characterizes China is a “perfect storm” for cover-ups and biohazard accidents. From Nature:

But worries surround the Chinese lab, too. The SARS virus has escaped from high-level containment facilities in Beijing multiple times, notes Richard Ebright, a molecular biologist at Rutgers University in Piscataway, New Jersey. Tim Trevan, founder of CHROME Biosafety and Biosecurity Consulting in Damascus, Maryland, says that an open culture is important to keeping BSL-4 labs safe, and he questions how easy this will be in China, where society emphasizes hierarchy.

Also contained in the Nature warning is a note about how scientists are concerned China is using these labs to develop bioweapons:

Ebright is not convinced of the need for more than one BSL-4 lab in mainland China. He suspects that the expansion there is a reaction to the networks in the United States and Europe, which he says are also unwarranted. He adds that governments will assume that such excess capacity is for the potential development of bioweapons.

“These facilities are inherently dual use,” he says. The prospect of ramping up opportunities to inject monkeys with pathogens also worries, rather than excites, him: “They can run, they can scratch, they can bite.”

China tried to develop a bioweapon to target human beings, and it just bit them in the ass

The bottom line? China tried to develop a highly infectious, extremely dangerous bioweapon that could be used to attack the United States, most likely. But their sloppy lab procedures resulted in the virus escaping their own BSL-4 facilities and infecting local populations. This is now the most likely scenario that’s emerging: An engineered bioweapon, but an accidental release in a domestic lab.

That’s what happens when you play with fire. Sometimes you get burned.

Listen to my emergency broadcast from Brighteon.com for more details.

6 responses to “REVENGE of the 12 MONKEYS: Nature Science Journal Warned about “Pathogens Escaping””