Cortina’s experiences as an intelligence investigator and anti-terrorist adviser brought him to such hotbeds of turmoil as the State of Israel, adjacent Middle East nations, and Central America.

Combining active duty with subsequent roles in military intelligence, Joe Cortina speaks authoritatively to those who long for a termination to America’s endless wars abroad. 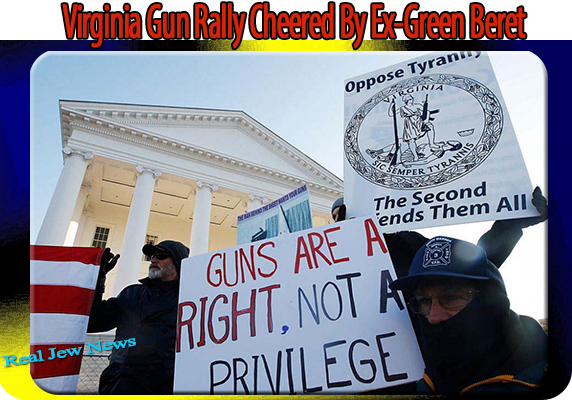 Brother Nathanael: What are your thoughts on the Gun Rally that just took place in Virginia?

Joe Cortina: The Jews who run the media told us that a bunch of ‘white nationalists’ with tattoos were going to show up and create a violent bloodbath.

It didn’t happen much to the disappointment of these treasonous Jews who know that they can’t enslave us unless they disarm us.

Now what I did see at the rally were main stream Americans that cut across all racial and gender divisions affirming their God-given right to defend themselves.

They’re finally waking up to a sinister tyranny that’s been building for years.

Br Nathanael: Waking up to a tyranny? What do you mean?

Joe Cortina: Waking up to HIGH treason against rights that the Founding Fathers strove to protect.

Look, we do have a Constitution in this Jew-ruined country, and every official has taken an oath to protect it just as I did.

The treason we’ve been seeing nationally by Senators’ Schumer, Blumenthal, and Feinstein—all Jews by the way—we’re now seeing on a local level in Virginia, not without a backlash by real patriots.

And ‘locals’ from all parts of America were there to say, ‘Not in our towns either.’

You can’t defend your rights or your life with squirt guns.

Br Nathanael: Schumer and Feinstein say this is what the police are for, to protect people’s lives, and that guns are killing people not saving them. Should we rely on police?

Joe Cortina: How the hell are the cops going to come on time if a burglar comes in and starts shooting? This is Jewish hokum to strip the goys of their guns.

In other words just dial 911 and die.

An armed people are a free people – a safe people, good citizens understand this well.

I recently saw in the news that a grandmother shot an intruder to protect herself. She used a Smith & Wesson, not an umbrella. Br Nathanael: Feinstein has railed against Americans who own assault weapons, and that the Second Amendment still holds true even if they’re outlawed. Is she right?

Joe Cortina: She needs to tell me just what an “assault weapon” is. And where the definition stops.

I was a commander of an elite airborne unit and I never heard of the weapons we used referred to as “assault weapons.”

This is a newfangled Jewish moniker to brainwash people into thinking that all those ‘white nationalists’ who affirm the Second Amendment could “assault” you someday.

And therefore the Second Amendment, they say, must be ‘updated,’ read: ELIMINATED.

Br Nathanael: But Schumer says he doesn’t want to take away ‘Uncle Tommy’s rifle that he hunts with, but only assault weapons that he doesn’t need.’

Joe Cortina: Who the hell is Schumer to tell me what weapon I have the right to use and which I don’t!

And he dumps on patriots by calling us “Uncle Tommy.” We don’t buy it Uncle Hymie!

Next thing he’ll say is that I don’t have the right to have ANY kind of protection – maybe a baseball bat, but Jew that he is, he’ll call that an “assault weapon” too.

If I want an AK, or an AR-15, or a high capacity sporting rifle, that’s my God-given right.

And if granny wants an AK to cut down an intruder instead of a Glock 22 that’s her business, not Schumer’s, and not any of the officials in Virginia planning on committing high treason.

I’m talking about Governor Northam, and legislators Saslaw and Filler-Corn, both Jews.

But I don’t see the president of this country who took an oath to protect the Constitution stepping in.

Br Nathanael: What does Trump have to do with it?

You’ve got Northam, Saslaw and Filler-Corn planning on committing HIGH treason ‘against the guts’ of our Constitution, namely the Second Amendment, and once that goes, tyranny and enslavement are inevitable.

Trump needs to denounce these traitors, specifically by name, and have the appropriate law enforcement agencies investigate them.

When Trump speaks in generalities like, ‘The Democrats want your guns,’ it’s only to make him look good to his USA! USA! crowd.

It is ALL traitors, not just Democrats—on both sides of the political aisle—who want our guns.

They must be called out BY NAME or we will have no security or freedom left to our Republic.

Trump Has A Hanukkah Party Here!

A Recipe For Civil War Here!

The Mugging Of America Here!

The Illustrated Protocols Of Zion Here!