Two weeks ago we wrote that war on Yemen will soon end. The Saudis lost their ally, they lost the war and would have to sue for peace. They are now doing so. But they fighting in Yemen will continue until that country finds a new balance.

Yemen’s internationally recognized government accused the Emirati air force of attacking its troops Thursday as they were heading to the key southern port city of Aden to fight separatists backed by the United Arab Emirates. The airstrikes killed at least 30 government forces, a Yemeni commander said.
…
Col. Mohamed al-Oban, a commander of the government’s special forces in Abyan province, said the troops were on the road, headed from Abyan toward Aden on Thursday, when the strikes took place, killing at least 30.
…
At least six raids were carried out by Emirati warplanes around the temporary capital, according to government military sources who asked to remain anonymous.

Southern separatist forces under the Southern Transitional Council and supported by the UAE hold Aden. Between 1967 and 1990 south Yemen, then named the People’s Democratic Republic of Yemen, was separated from the mountainous north. After uniting with north Yemen the south became neglected even though its eastern desert holds most of the country’s hydrocarbon resources. 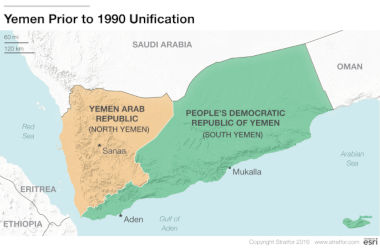