On Friday a black man named DeWayne Craddock, an engineer employed by the city of Virginia Beach, shot 16 people in the local government building, killing 12, 9 of whom were white. He had reportedly earlier submitted his resignation. This is yet another example of the phenomenon that VDARE.com calls “Disgruntled Minority Massacre.” It’s not caused by racism, but by anti-racism—with more than a little help from the complicit Main Stream Media, which probably explains its increasingly frenzied drive to suppress facts like Craddock’s race.

City officials are claiming they didn’t fire Craddock and have no idea why he did this. A New York Times report says different, that he’d started acting violent, and was on the verge of losing his job:

It remains to be seen what the suspect was after. City officials declined to discuss a possible motive for the attack, but they did say there was no immediate indication that the gunman had targeted anyone. The police chief, James A. Cervera, quelled rumors on Saturday that the suspect had recently been fired, and declined to say whether there had been friction between him and other employees.

But a person close to Virginia Beach’s city government, who was not authorized to speak publicly, said that the suspect had no history of behavioral problems until recently, when he had begun acting strangely and getting into physical “scuffles” with other city workers.

The person said that tensions had escalated in the past week, adding that the man had gotten into a violent altercation on city grounds and was told that disciplinary action would be taken.

This story, like all other New York Times stories, does not mention Craddock’s race.

A second story, describes Craddock as “an engineer” and “a 40-year-old former soldier,” goes on to say “Much about Mr. Craddock, an engineer who had worked on projects like sewer pipelines and pump station replacements, remained unclear.” [Virginia Beach Gunman Said He Was Quitting, Then Went on a Shooting Rampage, By Glenn Thrush and Alan Blinder, June 2, 2019 html]

You’re telling me! The Paper Of Record doesn’t even know what color he was, and apparently can’t find a photograph.

The NYT’s motto: “All The News That’s Fit To Print.”

This news blackout on Craddock’s race is unusually severe even by recent standards. Maybe there’s been some Journolist-style secret decree. A similarly photographless story in the Washington Post describes him this way:

He was a seasoned engineer, a military veteran with a shaved head and body builder’s physique. He had an all-business — but not off-putting — demeanor, one co-worker recounted. And a reserved but not peculiar presence, several neighbors said.

Again, no word of Craddock’s race, although WaPo went to a black church and interviewed friends of his parents. They weren’t described as black either.

But the U.K. Daily Mail, which specializes in crime news the American papers won’t print, managed to find no less than three photographs of him.

[PICTURED: ‘Loner’ Virginia Beach gunman, 40, and longtime city engineer who ‘brushed his teeth and chatted to a colleague’ before ‘indiscriminately’ shooting dead 12 and dying in a police gun battle, by Lauren Fruen and Rod Ardehali,Dailymail.com, June 1, 2019]

Still, if you get your information from the U.S. Main Stream Media, you’re out of luck.

A VDARE.com reader watched ABC News with David Muir and reports that it showed no photo of Craddock at all, just a silhouette. A white silhouette.

And ABC may be right about that—many Americans still get all their news from legacy MSM sources.

Which means that many, many, people who’ve heard about this case almost certainly believe that a white man did it.

Like this lady–she probably hated white males already, but here she’s the victim of MSM suppression. She assumes that if the longtime city employee wasn’t white, they would have said so: 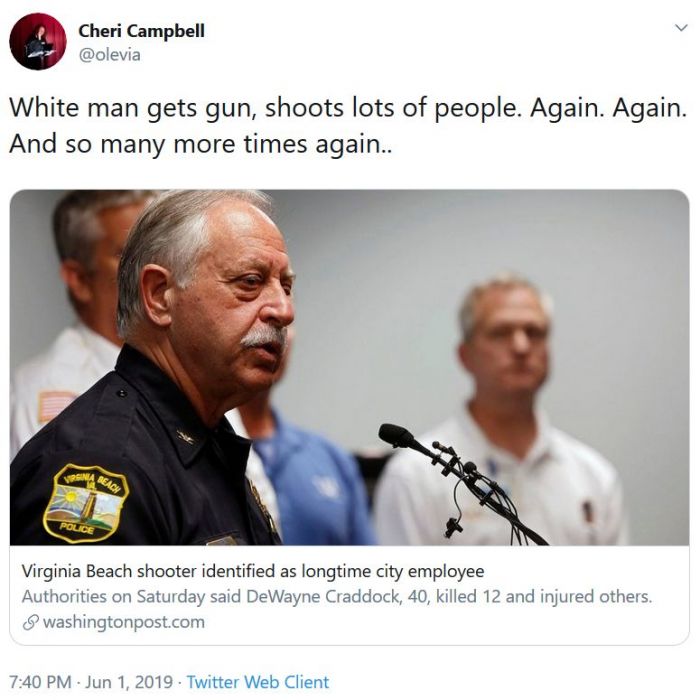 “Not reporting race” of a criminal unless it’s “relevant” is embodied in the AP Stylebook used by most MSM sources. It goes back to the New York Times’s reporting on the “Blood Brothers” gang in Harlem in 1964. As I wrote in 2007, this led to five days of rioting in Harlem, because the black community felt they’d been maligned by being called violent.

The plain fact is that, since the Civil Rights movement started, blacks in America have been encouraged to believe that racism is responsible for any bad thing that happens to them, or any disciplinary or law enforcement action taken against them. They are taught to hate whites—not just by their parents and clergymen, but by American schools. (Here’s a recent example from Powerline’s eminently respectable John Hinderaker). They feel, and express, hatred of white society without fear of criticism.

White men who lose jobs frequently kill themselves. Black men who lose jobs frequently kill their co-workers or employers. When black gunman Omar Thornton was fired from a Connecticut brewer for stealing beer, he killed eight of his white coworkers. Before he killed himself, he phoned his mother to say that his victims were racist: “I killed the five racists that was there bothering me”, he said [Omar Thornton: “I Killed the Five Racists”, by Kevin Hayes, August 4, 2010].

Subsequent investigation “exonerated” his victims, but the point is that MSM continued to treat this irrelevant accusation very seriously [Is racism at heart of Connecticut shooting? Answer still unclear, by Patrik Jonsson, Christian Science Monitor, August 4, 2010].

To repeat: what the Christian Science Monitor’s Patrik Jonsson and several other MSM outlets were asking was if the dead white people had been guilty of racism—not the man who murdered them.

To look at it another way: recently, the House Democrats held rigged hearings into “White Nationalism” clearly designed to build the case for repression. Did it occur to anyone in the MSM to ask whether its reports of this irresponsible demagoguery subsequently provoked a clearly disturbed black man to throw a white child off a balcony in a Minnesota mall?

In this kind of atmosphere, black killers are being “radicalized” not by obscure webpages, or overseas Muslim radicals—but by the MSM and the Democratic Party.

And when a Disgruntled Minority Massacre happens, there’s an outpouring of rage—not at the killers, but at anyone who mentions it. See Jonathan Chait’s tweet when a black man shot three white people (two fatally) on camera for reasons the gunman said himself were based on racial hate.

“I’m too angry to be tweeting about these racist demagogues at Breitbart but I can’t contain myself right now…These are sick, hateful, twisted people who exploit our worst impulses, and they have real influence.”

I'm too angry to be tweeting about these racist demagogues at Breitbart but I can't contain myself right now. pic.twitter.com/Jz3zTTr6HF

“Real influence”? If you want to see someone who exploited people’s worse impulses, and had “real influence,” I give you the former President of the United States. Remember that Barack Obama, of all privileged people, paranoically said that when he had a regular job as a research assistant in an office in New York he felt “like a spy behind enemy lines.“

And this “real influence” is dangerous to whites everywhere—see Jared Taylor’s You Swine Happy Now? Black Kills White to Right Historical Wrongs below for the story of Nkosi Thandiwe’s murder of Brittney Watts.

https://www.youtube.com/watch?v=eH8ylXIjKec&feature=youtu.be&bpctr=1559633234 (YouTube has limited the wider distribution of this video with the note: “The following content has been identified by the YouTube community as inappropriate or offensive to some audiences.”)

Nevertheless, among Americans who do know that DeWayne Craddock is black, I’m now seeing unprecedented levels of anger—not at Craddock, or at blacks, but at the MSM.

It may lead to Brett Kavanaugh levels of awakening—unless it can be stuffed down the Memory Hole.

Try and get the word out yourself, on social media. (VDARE.com can’t rely on Google anymore). Here are half a dozen items for you to promote:

Remember, this News Is Fit To Print!

And Democracy Dies In Darkness!

Posted in Race, The Media | 3 Responses