Why America Was Never Great Again

By Brother Nathanael Kapner on December 16, 2017 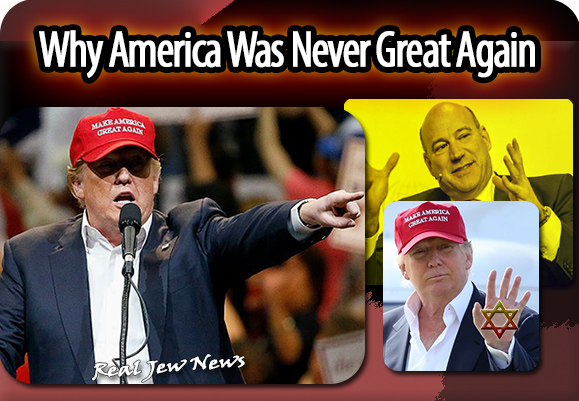 FUTURE GENERATIONS BY 2020 with far-sighted vision will look back and hardly see that the ‘Jewish Question’ has left a few with troubling consternation.

Not that the question of Jewish unbelief is even relevant…nonetheless, it’s worth considering for future generations to reminisce.

Jews in our post-gentile modern world don’t believe in anything. They don’t even make a show of believing in God let alone making a pretense of it.

Jews are atheists in the main stream, secularists in the majority, and irreligious in their manipulations. Why else would they clamor for war? They’ve infiltrated both parties leaving the hapless country without a choice of political preference.

T.S. Eliot summed it up:

The population should be homogeneous; where two or more cultures exist in the same place they are likely either to be fiercely self-conscious or both to become adulterate. What is still more important is unity of religious background, and reasons of race and religion combine to make any large number of free-thinking Jews undesirable.

What Eliot affirms is that like a mole dug into society’s mold, the ‘free-thinking’ Jew will chew up its unity, effeminize its will, and annihilate its moral purview.

Simple-minded Gentiles will ask, “Why then are Jews so diversified in their opinions? They apparently are not united in any so-called influence peddling, are they?”

The question has befuddled many a goy who have come under the spell of Jewish moral-high-ground posturing. For the Jew doesn’t simply have a position per se, but superseding any given stance on any given subject is that the Jew dictates his position from a Lectern.

He sees himself as a ‘light to the Gentiles’ while enshrouding the goy in darkness. JEWS UNDERSTAND THIS DEVICE better than a goy can, simply because the Gentile just wants to live his life.

But life is not worth living for the Jew unless his mastery over the goy is comprehensive and not resisted.

The goy who has come under the influence of ‘political correctness’—a masterful ploy of the Jew to bring the goy into a state of self-censorship—has saved the Jew many a dollar in his efforts to bind the boundaries of discourse by more expensive means.

The Jew realizes that the goyim are prone to shift from one opinion to another based on the ‘Catch Phrase Of The Day.’ Trump is the perfect example. One day he says, “Russia is okay,” the next, “Russia is not okay.” It depends on what ‘Jew Counsel Of The Day’ he gets.

Which brings us to a fatal conclusion, America was never great again, it didn’t happen, it could not happen.

The Jew had by 1913 so definitively taken over America by bringing his printing press to the precincts of DC so that any recovery by the Gentile would take a yeoman’s effort.

The goy simply didn’t have it in him. He was either on the payroll of the Jew or so snowed-under that he couldn’t even grasp the obvious message of Little Orphan Annie’s character, Daddy Warbucks.

The rest is history, Jewish history. Perhaps the end of history for Americans.

The ruining of their country is strictly a Jewish affair.

And: Seeds Of America’s Collapse Here!

And: What If Jews Ran America? Here