Propaganda spin cycle: ‘Syrian Observatory for Human Rights’ is funded by US and UK governments 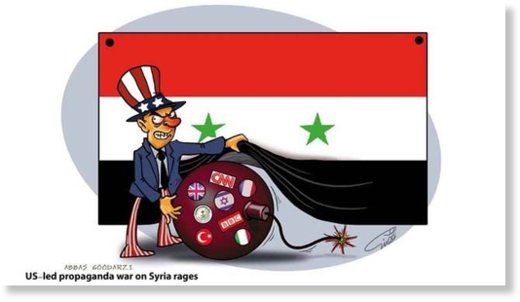 For 5 years, bloody mayhem has been going on in Syria, and in all that time only independent media has picked up on the really obvious flaw in the official narrative about the “Syrian civil war” …

Officially, the Syrian Observatory for Human Rights (SOHR) is a UK-based organization providing data to the Western press about troop movements, government policy and public sentiment in Syria. The Western press then reprints the information they are given – no questions asked: What Western media editors conceal from the public however, is that the “Syrian Observatory for Human Rights” is neither based in Syria nor is it an observer of what actually goes on there. It is essentially one man – Abdul Rahman, aka Rami Abdulrahman, aka Osama Suleiman – a three-term convicted criminal in Syria, based out of a small house in Coventry, England, and his ‘team of four activists in Syria’.

Apparently all it takes to inform the entire Western media about everything that is happening on the ground in Syria is four people. Four people could, theoretically, provide reasonably objective reports, but only if they were open to receiving information from many sources, including ones supportive of the Syrian government. They might even be able to produce – using objective discernment – reliable statistics of casualties, refugees and terrorists/rebels. But SOHR has consistently reported the ‘civil war’ from only the perspective of the so-called ‘rebels’, discounting Syrian government reports out of hand, as well as reports from civilians that reveal rebels’ crimes.

That fact alone makes SOHR about as reliable a source of information on the Syrian conflict as the US State Department and the British Foreign Office, who have a vested interest in spinning the war to produce one end: the death or removal of Syrian President Bashar Al Assad.

Rahman, by his own admission, is a member of the ‘Syrian opposition’ and seeks the ouster of Al Assad, so that clearly removes any semblance of objectivity in his ‘reporting’.

But there’s more. Rahman, and the SOHR that he runs, has long ago been exposed as a Western propaganda front. As Tony Cartalucci writes in his expose:

“One could not fathom a more unreliable, compromised, biased source of information, yet for the past two years, his “Observatory” has served as the sole source of information for the endless torrent of propaganda emanating from the Western media. Perhaps worst of all, is that the United Nations uses this compromised, absurdly overt source of propaganda as the basis for its various reports.”

This man is as far from a ‘human rights activist’ as anyone can be. His funding comes from the European Union and “an unnamed European state,” most likely the UK as he has direct access to former Foreign Minister William Hague, who he has been documented meeting in person on multiple occasions at the Foreign and Commonwealth Office in London and shares Rahman’s enthusiasm for removing Assad from power. The NYT in fact reveals that it was the British government that first relocated Abdul Rahman to Coventry, England after he fled Syria over a decade ago because of his anti-government activities:

“When two associates were arrested in 2000, he fled the country, paying a human trafficker to smuggle him into England. The government resettled him in Coventry, where he decided he liked the slow pace.” Et voila! What was once a criminal with subversive tendencies is now a ‘human rights activist’ (but really a British intelligence asset). Does anyone really think that any of these organizations would pay a convicted criminal to be anything other than their mouthpiece for seeding the lies printed in Western media? As Joe Quinn and Niall Bradley noted last year, figures provided by the SOHR are routinely cited by Western media to generate public support for airstrikes and regime change in Syria.

So who in the Western media uses such a biased propaganda source? It would be easier to provide a list of who doesn’t. CNN, Reuters, Associated Press, BBC, Al-Jazeera, Huffington Post, Fox and Vice… just to name a few. These presstitute organizations apparently don’t care that they’re taking the word of someone who has a political interest in the outcome and who is funded toward that end by the British government. Are there any investigative journalists left in mainstream media? Those with two firing neurons are few and far between these days…

Western intelligence agencies set up the armed opposition/terrorist proxy forces in Syria, so they would obviously want to control the media narrative about what happens there. Rahman does his part by vacuuming up information reported by those same proxy forces. This information is then given out to the Western media with SOHR as source. The whole operation is so patently shady, it should scream ‘spooks’ to any real journalist. And to be honest, Western journalist really should know better.

What’s that phrase that George Dubya Bush mangled: ‘fool me once, shame on you, fool me twice, shame on me’. Mr. SOHR is basically a less sophisticated Syrian war version of the Iraq war’s ‘Curveball’ or Rafid Ahmed Alwan al-Janabi (for those interested in his real name). Alwan was the guy that the US government used to back up their ‘Saddam has WMDs’ claim that justified the invasion and 10 year occupation of Iraq, and the murder of 1.5 million Iraqi citizens. To his friends, Alwan was a congenital liar who fled Iraq in 1999 when he was caught trying to embezzle state funds. When he fled to Germany in 1999, and told German intelligence that he graduated top of his chemical engineering class at Baghdad University and worked on a team that built mobile labs to produce WMDs, he became ‘curveball’.

When this information was passed on to US intelligence, they conveniently ignored the evidence that he was a congenital liar and embezzler who placed last in his university class and drove a taxi for a living before fleeing to Germany, and decided that everything he was saying about Iraqi WMDs was true. To further prove his credentials, ‘curveball’ identified a a particular Iraqi facility as a “docking station for mobile labs”. When UN weapons inspectors visited the site on February 9, 2003, they found a warehouse used for seed processing. So with this information, then Sec. of State Colin Powell decided to do the right thing, and ran to the UN and told them all about ‘curveball’ and his damning ‘evidence’ of Iraqi WMDs. Why? Because US politicians had long before decided that they were going to invade and destroy Iraq and loot its resources. They were, as the saying goes, ‘fixing the facts around a war policy’ by using the bogus claims of known liars to justify their war. This is precisely what Mr. SOHR is doing for the US government today, and still, the media sucks it up and regurgitates it for the general public.

So this is what our media has become, a gaggle of morons brainlessly repeating lies vomited up by our psychopathic reality-creators, thereby manipulating public perception of world events and making sure we all see the world the way they want us to see it, and not how it really is. One thing is certain: if you believe what Rahman and the SOHR is telling you about what’s happening in Syria, you are believing in lies.

Beau Christensen, a Wisconsin native, has been a SOTT editor since 2006. A long-time non-believer in what we’re told by the media and government, he is focused on exposing the lies and disinformation they feed us and studying the accompanying decline of civilization. When he’s not waging information war online, Beau enjoys eating bacon and smoking cigars in the company of many animals and good friends.

Posted in Controlling the News And/Or the Free Exchange of Ideas and Information, Ersatz Media Activists, Syria, The Media | 3 Responses

3 responses to “Propaganda spin cycle: ‘Syrian Observatory for Human Rights’ is funded by US and UK governments”