Last moments: seconds before she was shot with no knife or blade visible

An 18-year-old Palestinian girl was shot by Israeli troops at a Hebron checkpoint for allegedly refusing to show her purse or face and “trying to attack” a soldier. She died of multiple wounds in a hospital after bleeding in the street for 30 minutes.

Hadil Hashlamoun was shot 10 times by Israeli Defense Forces at an Israeli checkpoint in Hebron near the entrance to Shuhada Street on Tuesday.

IDF soldiers did not let paramedics approach the teenager, who the Israelis claimed had tried to stab one of them. Photos posted online, however, appear to contradict the accusation.

The 18-year-old died of her wounds in the Shaare Zedek Medical Centre later in the day.

The hospital’s spokesperson said Hadil had been “terribly injured, and underwent surgery upon her arrival,” Maan News Agency reported.

“Three operations were performed on my daughter,” Salah Hashlamoun, Hadil’s father told local reporters. “A part of her intestines had to be removed. But the bullet in her chest was what killed her.”

According to reports in local Palestinian media, the woman was shot after she refused to open her purse or lift her face veil, the niqab, upon request by IDF troops. She was then left out in the street to bleed for 30 minutes before Israeli soldiers allowed doctors to approach her, the Middle East Eye news agency reported.

The Israeli army, in turn, claimed that the teenager was a terrorist who had attempted to stab one of its soldiers. According to the IDF’s story, Hashlamoun was in critical condition after being shot in the legs, and later succumbed to her injuries.

BREAKING: Palestinian attempts to stab soldier at military position in Hebron. Forces responded with fire at the attacker & identified hit.

However, photos taken by the Youth Against Settlements group shortly before and after the shooting appear to contradict the IDF’s statement.

One of the group’s members claimed that the woman made no attempt to stab a soldier, adding that she most likely was shot after refusing to lift her veil.

‘Throw a stone? Catch a bullet!’

The incident comes just few days after Jerusalem Mayor Nir Barkat declared “war” against Palestinian stone-throwing, giving police a green light to use live ammunition to counter rock attacks against officers and Jewish civilians. The measure was approved on Friday. In response, Palestinians staged a ‘Day of Rage’ in protest. 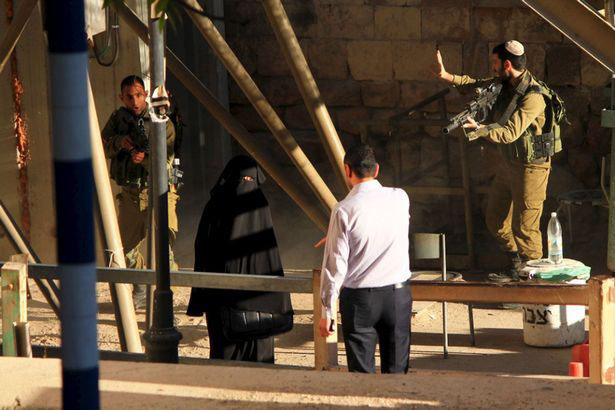